As you might know, Google released an update on April 21st that made mobile-friendliness a ranking factor for mobile search. Now that the so-called “mobilegeddon” has taken the world of digital marketing and SEO by storm for about a month now, it’s time to take a look at how this change might be impacting websites.

“Might” is the key word here since it’s too early to tell significant results. But we do have some clues as to some of the initial effects of Google's mobile update. While some are expected, some a little less so.

One study by Silverbean compared the level of desktop to mobile traffic for 16 websites before the update and then a week after. In the days following April 21st, the average mobile traffic share was 52.2%, which is a 12.9% increase. Of course, for different sites the impact on mobile traffic share itself has varied widely from almost none to highly significant.

Since the update is rolling out slowly, we can reasonably say that these initial findings will get more pronounced over time. This especially true since 48% of search traffic comes from mobile right now and is expected to surpass desktop traffic fairly soon.

Yes, the bogeyman of decreased rankings has started manifesting itself. But so far, the fears of dramatic drops are mostly unfounded (for now, of course.)

Sites that have decided to forego mobile optimization at all or have many pages only optimized for desktop are seeing a slight dip on the first page. But as you click through to page two and on, the decreased rankings for desktop only sites becomes much more noticeable.

While the long-term effects remain to be seen, this could be a harbinger of all those frantic warnings of decreased rankings we all heard about.

Before the update, it’s estimated that close to 40 percent of sites missed the mark for Google’s mobile-friendliness standards. Google has now reported seeing a 4.7% increase in mobile-friendly sites throughout April and May.

That’s a nearly 5% increase in just two months time. The threat of the mobile apocalypse evidently did strike fear into the hearts of some webmasters, and it wouldn’t be a stretch to say that the uptick in mobile-friendly sites will continue.

Because the update only affected searches on mobile devices, it follows that the search results on smartphones will start looking different than those that pop up on desktops (Google has classified tablets in the desktop category.)

But in addition to this obvious outcome, one less-emphasized part of the update was the inclusion of apps in mobile search results. So as they’re working on adapting to the algorithm, websites are now competing with apps with information relevant to the search that present the option to open or install the app straight from the SERP.

Once you get past the local search results, you can see that mobile-friendly sites are topping the first page on my iPhone as opposed to my computer desktop.

In a nutshell, that’s what we’re seeing so far in the wake of Google’s mobile update. It’s still early on, so while these results are still relevant, what happens in the long-term will tell the real tale of how this monumental shift has changed to SEO space. 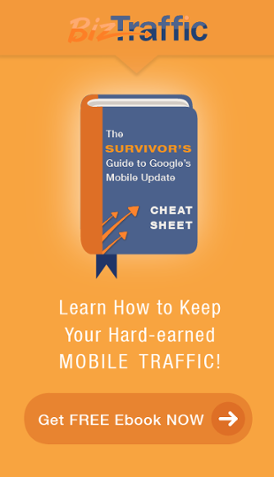